Foresters of Belacoba range caught five persons, including an employee of the state irrigation department, in Odlabari last night and seized animal parts, a firearm and two cars.

The five were later arrested. They have been remanded in 14 days' jail custody.

"We had information about the gang. Those arrested have links with animal parts smugglers in the Northeast. They had brought in the wildlife trophies from Assam and were planning to smuggle those to Bhutan. All five were arrested, including an employee of the state irrigation department who is from Gorubathan (in Kalimpong subdivision)," said Sanjay Dutta, the range officer of Belacoba under Baikunthapur forest division.

A leopard skin, a piece of ivory weighing around 800gm, skull of a Himalayan black bear, a revolver and a live cartridge and two cars were seized.

Desh Bahadur Pradhan from Gorubathan who is an irrigation department employee, Rajiv Gazmer and Sachin Chhetri, both from Kalimpong, and Avinash Chhetri and Suraj Sonar from Teesta Valley Tea Estate in the Darjeeling, were produced in a court here today. Charges under Wildlife Protection Act, 1972, have been brought against them (Telegraph) file pic. 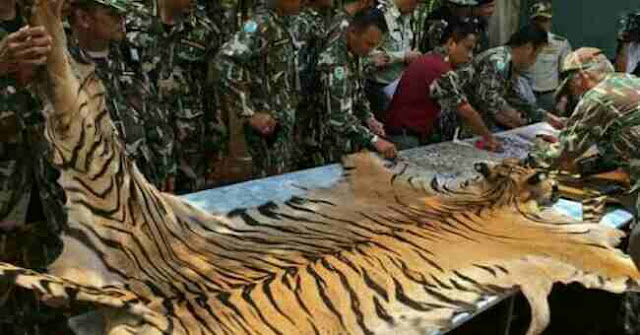