Police have arrested seven persons allegedly involved in the murder of driver and cleaner of a sheet rubber-laded truck and the theft of the load. The bodies of two men were found near Mainaguri on September 3. The police started a probe and found that the bodies were of driver Jay Prakash Singh and cleaner Ajay Singh. "Mafiz Ali and Abdul Kaser, residents of Assam, strangled to death the duo and hijacked their truck loaded with sheet rubber worth Rs 16 lakh. The truck was going from Agartala to Punjab. We arrested the murderers, along with two from North Dinajpur, who had helped in taking the stolen rubber to Calcutta," said Amitabha Maiti, the superintendent of police of Jalpaiguri.
"We also arrested Pankaj Jain, a Nagaland resident, who had tried to buy the stolen rubber. Sayak Dutta and Tapash Pal from Siliguri had helped the Assam duo unload the rubber and keep it in a godown were also held," said the SP. While Jain was arrested with the help of Bidhannagar police, four others were picked up by police in Madhyamgram. The duo from Siliguri is in the custody of local police now. The other five were remanded in police custody for 10 days by a court here today. 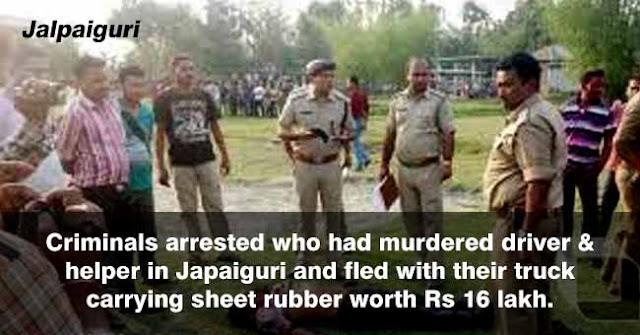