Despite warnings of pay cuts and licence cancellation, Darjeeling Hills completely shuts down

- September 29, 2016
A 12-HOUR strike in Darjeeling district Wednesday, which had become symbolic of one-upmanship between the Gorkha Mukti Morcha that had called it and the ruling Trinamool Congress that tried to foil it, ended with the GJM calling it a “near complete success” and the TMC calling it a failure. Many in Darjeeling, in fact, see the government overdrive to foil the bandh as having backfired. Over the past two days, directives were issued by the government, backed by a Calcutta High Court order that deems strikes and bandhs unconstitutional, to offices, schools and transport operators. Another ostensible reason for people staying indoors was the fear of violence, so intense had the build-up been.
304 GJM members including Kalimpong MLA Sarita Rai were arrested as “preventive detention”. TMC members allegedly broke the lock of the municipality office. The strike was called by GJM chief Bimal Gurung to challenge Chief Minister Mamata Banerjee’s claims that over Rs 4,000 crore had been given to the Gorkha Territorial Administration, which Gurung heads, for projects in the region. Gurung accused her of lying and alleged a shortfall of over Rs 1,000 crore. “While TMC seemed to have gained some ground with defections from GJM, their high handedness in telling people that they have to keep their shops open or go to their offices and schools has once more set the hill people against them,” said Upendra, columnist and political analyst in Darjeeling.
Government officials met with transporters Tuesday while the finance department sent them a directive to ply. “We were told that if commercial vehicles and taxis did not run, licences and permits would be revoked. We said okay, we will run vehicles, but we can’t force drivers to come,” Narbu Lama, president of the Darjeeling All Transport Joint Action Committee, told The Indian Express. He said transporters were willing but vehicle owners did not let their cars leave their garages and drivers did not show up. Darjeeling town alone has 4,000 vehicles that ply commercially. Very few of these, if any, were on the road. Teachers at Darjeeling’s St Joseph’s College, which receives government aid, said they were open but no student turned up. “We also received a directive from the finance department. It said schools and colleges needed to be open or salary would be deducted,” said a teacher.
Swaraj Singh, an assistant teacher in the government-run Bhanu High School in Basboti village, said they had 60 per attendance. “There was police protection, so there was no trouble,” he said. “We had received a government directive that said leave on this day would be accepted only on three grounds – maternity leave, child care issues and sudden hospitalisation – else our salary would be deducted.” Amar Rai, Darjeeling MLA and municipal corporation chairman, said the strike showed both parties that the hills can only be controlled by hill parties. “The TMC stationed three ministers to ensure that the strike does not happen — Gautam Deb in Kalimpong, Rudranag Bhattacharya in Kurseong and James Kujur in Darjeeling. Despite that not one shop opened in these areas,” he said. “Because of the court order, we were going to keep the municipal offices open,” he added. “But we couldn’t get in touch with the chowkidar in time, so the police brought him. But he had the keys only to one lock while there was a second a lock, we don’t know who had placed it. TMC workers got agitated and broke open the second lock, and a third lock inside. I have ordered an inquiry.” (By Indian Express) 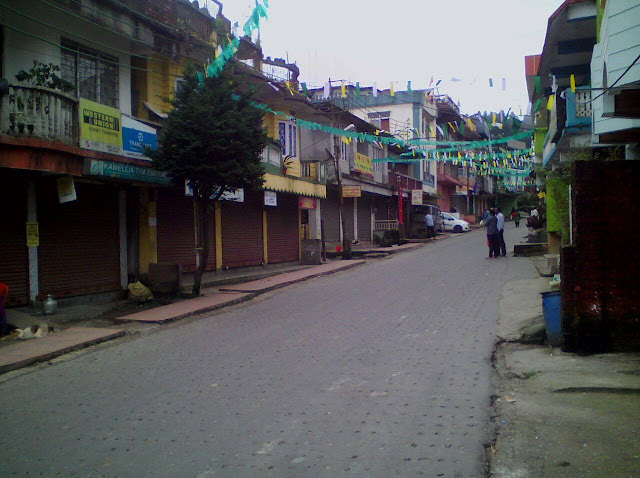