- September 23, 2016
Tapas Sarkar, the CPM sabhadhipati of Siliguri Mahakuma Parishad, speoks at a demonstration organised by the Left Front near the Siliguri Jalpaiguri Development Authority office in Siliguri on Friday.
The Darjeeling district Left Front leaders, including councillors of the Siliguri Municipal Corporation and members of the Siliguri Mahakuma Parishad, and 200-odd supporters launched the demonstration demanding immediate payment of dues to the civic body.
Party leaders said they would organise a rally to Nabanna in November if the state did not respond to the repeated requests of the SMC and SMP to disburse funds to them. The protest that started around 2pm continued till 5pm.
Telegraph, Pic: Kundan Yolmo 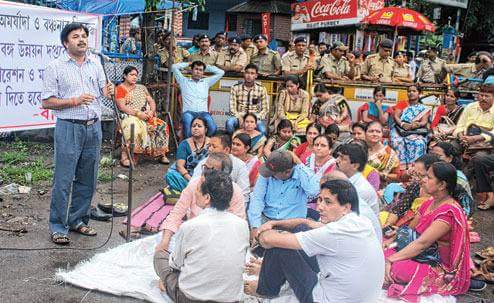