Darjeeling MP and Union minister of state for parliamentary affairs S.S. Ahluwalia yesterday said both Mamata Banerjee and Bimal Gurung should take a conciliatory approach and shun their rigid stand to ease tension in the hills and ensure that the GTA functioned at its best.

"There is no doubt that strike leads to inconvenience for common people. But simultaneously, the reasons for calling a strike need to be analysed. We fail to understand what has led to such a disbelief that Mamata Banerjee has become determined to act against the GTA and the Gorkha Janmukti Morcha. It is the same Mamata Banerjee who had in July 2011 endorsed the formation of the GTA. The Morcha had clearly said then that it was not abandoning its demand for a separate state," Ahluwalia said.

Ahluwalia was in Siliguri to attend the last rites of Arabinda Ghosh, the councillor of ward 15 of Siliguri Municipal Corporation. Ghosh had died on September 18.

"The manner in which she has mentioned the quantum of funds sent to the GTA can create confusion among common hill people. Such remarks do not suit a chief minister. Instead of taking an aggressive approach, she should have held talks with Bimal Gurung. Both Mamata Banerjee and Bimal Gurung should walk a few steps for conciliation and to resolve all pending issues so that the GTA can function in a proper manner. The practice of levelling allegations and counter-allegations would not serve the purpose," added the MP.

Asked whether he would act as a mediator for improvement in the situation, the Darjeeling MP said: "I have no place in between and I might be rebuked in case I make any such attempt. I am the elected representative of Darjeeling Parliament seat. So, I am trying to drive home the point that aggression might corner someone for some moments, but eventually, it would foment a bigger trouble." 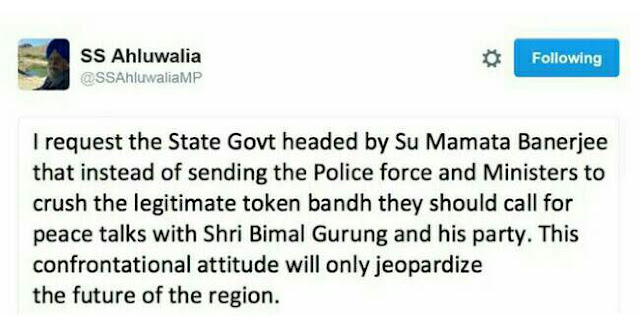