- September 23, 2016
A youth was arrested late yesterday evening in connection with the murder of a 19-year-old girl whose body had been found in a tea garden at Salbari in Siliguri.
Police said the arrested person, Ramu Oraon, 23, is from the same area where the girl used to stay. He works as a conservancy worker at Sukna.
The girl's father had lodged a police complaint alleging rape and murder.
Neighbours had said the girl used to take training in tailoring and she had left for her classes on Wednesday morning but never returned.
On Thursday, the teenager's body with strangulation marks and without clothes was spotted in Dagapur Tea Estate.
Commissioner, Siliguri metropolitan police, C.S. Lepcha, who held a press meet around 11pm, said: "When the girl was returning home after her training on Wednesday, Ramu offered her a ride on his bicycle. When they reached Dagapur tea garden, the youth sexually assaulted her and strangled her with the clothes she was wearing. He fled after that."
Earlier yesterday, Siliguri mayor Asok Bhattacharya had said he will write to chief minister Mamata Banerjee requesting her to take steps to arrest those who, he said, had raped and murdered the girl.
Local people had raised a blockade on Champasari Main road for around an hour demanding the arrest of those involved in the incident.
Yesterday morning, Bhattacharya went to the deceased girl's house, along with Mukul Sengupta, a CPM councillor, and some other Left supporters.
"I will write to the chief minister and request her to take all necessary steps to immediately arrest those involved in this heinous crime. I am shocked to see that a girl was tortured and murdered at a time the chief minister is in the district," Bhattacharya had said.
"If the miscreants are not arrested immediately, we will launch a movement across town. Members of our women's wing will organise demonstrations in front of the local police station. We might even call a general strike in the locality," he had added.
Around 12.30pm yesterday, local people blocked the Champasari Main Road that connects NH31 to Milan More.
The agitation continued for about an hour as the protesters demanded the arrest of the girl's murderers and intense police patrolling in the area to prevent such crimes.
We are worried about the safety and security of our girls and women and we want the police to take immediate steps," a protester had said.
Indra Chakraborty, the deputy commissioner of Siliguri metropolitan police, had said: "We have started probing into the case. Our investigators have got some leads which they consider important and can help solve the case soon."
Telegraph 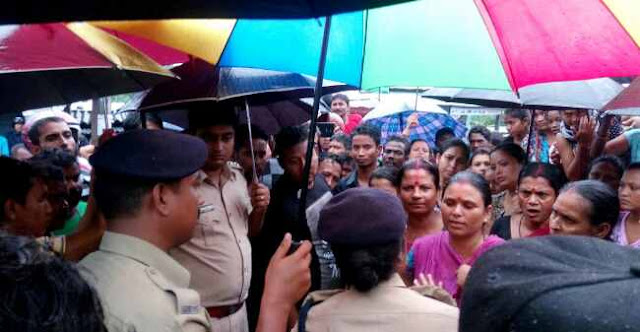