The agreement that led to 1,000 acres of farm land in Bengal's Singur being allotted to Tata Motors for a Nano factory was cancelled today by the Supreme Court, which called it "bad in law". The land has to be returned to farmers within 12 weeks, the court ordered.

Here are 10 developments in the story:

The land was acquired in 2006 by the previous Left government. Two years later, the Tatas moved their Nano operations to Gujarat after massive farmer protests led by Mamata Banerjee, who was then the top opposition leader in the state.

Even after exiting the land, the Tatas had told the court that the company would not give it up and would use it for other purposes. A spokesperson of the company said on the ruling that its own appeal in the case is yet to be heard by the Supreme Court.

The court commented that the Left government had seemed determined that the project must come up in the state, and it was the company which seemed to have chosen the precise location for the project.

"The order is a victory for us. I am remembering all those who made sacrifices for this day," said Chief Minister Mamata Banerjee, whose rise to power in 2011 was attributed mainly to the land agitations in Singur and Nandigram.

The acquisition was approved by the Calcutta high court but a rights organization moved the Supreme Court against it.

The top court ripped into the Left government and Tata Motors for what it called the illegal manner in which land was acquired, saying that the entire exercise appeared to be a "farce and an eye wash", which was "shocking".

"It's a great day for farmers not only in Singur but across the country. This is a good message from the Supreme Court," said the lawyer of one of the petitioners, farmer Santi Ranjan Das.

The court today also said the money paid to farmers for the land would not be returned as they were "deprived of their land for a decade".

The Singur protests gained global attention because at the centre was a project to roll out the world's cheapest car. Farmers argued that the most fertile land in Bengal had been allotted to the Tatas against the law. 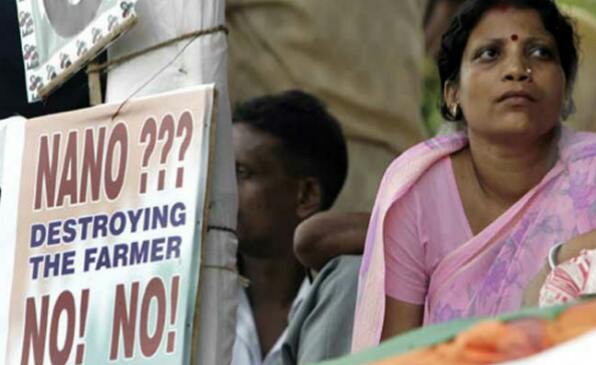