- March 24, 2019
Sashastra Seema Bal (SSB) nabbed one person and seized large quantities of explosive materials from his possession on Saturday.

The arrested accused was identified as 26-year-old Chiran Roka, a resident of Ruma village in Meghdi district of Nepal.

As many as 205 packets of explosive gel, 355 electrical detonators, two mobile phones, and four SIM cards were recovered from his possession. 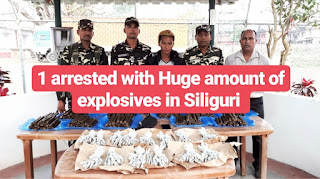 The Border Interaction Team seized the material at Panitanki checkpoint in Siliguri. Further investigation in the matter is underway. (ANI)

egeo.com said…
I live at Sukna also....I am a website developer also....I saw your posts....I think both of we can increase our business together.....Just check me at www.hindistatusforlife.com
13 September 2019 at 09:19