- December 06, 2018
An old man was run over by a truck at Siliguri Jhankar More while he was crossing the road this noon around 12.30pm. His legs had got badly crushed.
Our followers Naseem and Sahil who were at the spot rushed him to Siliguri District Hospital at Court More in a Toto but none attended him. It's alleged that the people there said there is a spot boy who takes the patient inside emergency and was attending to someone.
Anyhow the duo took him to the emergency by themselves. As his treatment was underway he expired. Already 30 minutes had passed in the premises which were very crucial. His family has been contacted.
We salute Naseem and Sahil for showing immense HUMANITY. The duo are still with the deceased family at Medical where post mortem is going on. May God bless them and hope administration looks into the alleged carelessness of the hospital. 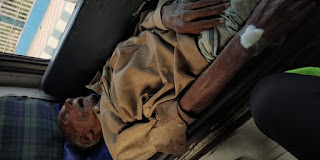