- November 22, 2017
The Bengal public works department will build a road over bridge (ROB) above railway tracks in Siliguri's Burdwan Road which will be upgraded to a four-lane road.
"We will upgrade Burdwan Road to a four-lane road which will connect Asian Highway II. The work on the four-lane road has already started and it will ease traffic congestion in Siliguri. As part of the four-lane project, we will build a road over bridge between Jhankar More and Airview More. There will also be service roads on either side of the four-lane road," said Indever Pandey, the principal secretary of the PWD.
He was speaking at the administrative review meeting convened by chief minister Mamata Banerjee at Uttarkanya here on Wednesday.
"As of now, there is an ROB at the location, but once Burdwan Road turns into a four-lane road, there is a chance of traffic congestion. That is why the new ROB has been planned," said a source.
Siliguri has four ROBs as of now.
Pandey said the PWD had envisaged more projects for Siliguri. Among the projects are a bridge over the Mahananda river, elevation of a portion of Sevoke Road and upgrade of NH31 into a for-lane road between Balason Bridge and Darjeeling More.
"Traffic congestion along the NH31 stretch needs to be eased. In total, all these works entail an investment of around Rs 1,000 crore," said Pandey.
At the review meeting, the delay in the construction of the Islampur bypass and the four-lane work of the east west corridor near Dhupguri were discussed. Mamata asked tourism minister Gautam Deb to resolve the problems which were holding up the projects.
Telegraph 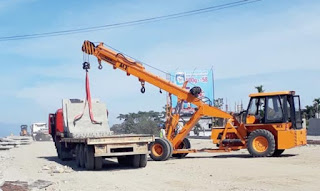 Avishake Gazmer said…
It is good to see to ease traffic congestion in Siliguri PWD will build a road over bridge (ROB) above railway tracks. I think it will also help tourism in Siliguri and Darjeeling area.
14 December 2020 at 03:47