👉 He now runs a computer training institute for the disabled people 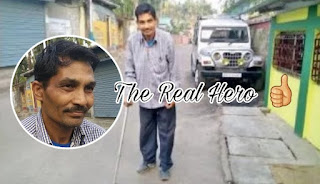 Basam Sonar has become a source of inspiration to the people of West Bengal's Jalpaiguri.

In 2005, an injury while competing in a high jump competition paralyzed all of Basam's limbs. Despite the limitation, he has managed to start a computer training centre to help other people with disabilities, helped people with limited abilities to get government certificates and facilities, and also rehabilitated many disabled people.

A resident of Lakshmipara tea garden of Banarhat, Sonar was employed as a marketing manager before the tragic accident. Post his injury, his life changed dramatically. The injury not only paralyzed him physically, but it left an indelible mark on his psyche as well. The excruciating pain drove him to the point of suicide.

A ray of hope emerged for Sonar when Alipurduar MLA Dasharath Tirke got him admitted to the SSKM hospital. After an eight-month-long treatment, he managed to move his hands. However, his legs failed to respond to the treatment.

Basam decided to move on. He started a lottery business and managed to save Rs 35,000 from it. By now, he had also started an organization which was working for rehabilitation of the disabled people. He donated Rs 30,000 to the organization.

A second stint with the lottery business proved double lucky for him and he managed to earn Rs 60,000 by buying lottery tickets.

He invested the money to buy three computers and started a computer training centre for the disabled people in the tea garden.

His efforts were noticed by the local administration and the news of his inspiring journey soon reached the government offices.
On December 3, the world will be celebrating International Day of Persons with Disabilities. Jalpaiguri District Magistrate Rachana Bhagat will honour Basam as the role model of state government at Calcutta University Auditorium.

The district administration has also helped Basam's cause by donating ten computers to his institute.

Reflecting on his recovery and the remarkable journey, MLA Tirke says, "It is a miracle. We could not expect he will be alive. But the main miracle is the work that he has done."

"I have seen two parts of life. I have learned to take challenges in the next part. I have to carry artificial rectum. Sometimes it pains. I feel honoured for this award. I shall be grateful if government help me for my further treatment," Basam said.
TOI
Banarhat Dooars Jalpaiguri