- November 18, 2017
Exploiting Flipkart's Seller Protection Fund (SPF), a gang posed as online sellers and cheated the Bengaluru-based e-commerce major to the tune of Rs 17 lakh. Flipkart filed a complaint with Koramangala police on Wednesday and named nine persons as suspects who are yet to be traced.

According to police sources, the fraud was orchestrated from early 2017 with the suspects registering themselves as sellers trading online in various products, including electronic items. They studied the SPF scheme which guarantees an automatic refund to the seller if the sold product goes missing or is damaged in transit in case of a return from the customer and plotted to take the company for a ride.

The complaint states that the gang, possibly operating out of West Bengal, had registered as different sellers and started shipping products to the customers via Flipkart's logistic services. Every time, the customers returned the product stating defects or wrong shipment, the sellers informed

Internal probe
Suspecting foul play in a string of transactions with the majority of orders from West Bengal, Flipkart started an internal probe on May 15, 2017. It found that the sellers and customers were indeed the same party operating from different addresses. It was suspected that the so-called seller shipped the product to the customer who would return the item to the seller and claim a cash refund. Meanwhile, the seller, who after procuring the product from their gang member (customer), would lodge a complaint with Flipkart that the product had gone missing.
The gang obtained an automatic refund costing Flipkart thousands of rupees through numerous claims. The complainant claimed that Rs 17 lakh had been siphoned off in various instalments from Flipkart.

Twist in tale
A Flipkart official visited Siliguri on May 24, 2017 and questioned a man and woman registered as sellers and believed to be instrumental in the fraud. Kumar also met another man, the couple's aide, in Bengal who, according to Flipkart's complaint, admitted to the fraud. Later, the man's younger brother is said to have deposited a sum of Rs 10 lakh and submitted a letter of apology to Flipkart in West Bengal.

In a bizarre twist, the elder brother met Flipkart agents in Kolkata on August 29, 2017 and demanded Rs 5 lakh be refunded to him as he had defrauded only Rs 5 lakh and his brother had wrongly deposited a higher amount. The firm claims the man threatened the Flipkart investigating official via WhatsApp for a refund or face dire consequences, the police complaint read.

While Flipkart acknowledged filing a police complaint, their representative refused to give more details on the issue.
Petlee Peter | TNN 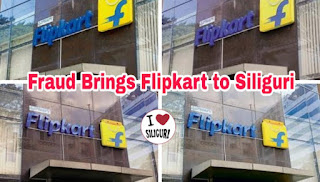