- August 17, 2017
A Sikkim National Transport bus heading to Gangtok from Mangan falls off a cliff some 500 meters away from Ranagang in Sikkim.

The bus fell some 100 feet and landed on the road below. Sources say 3 people have been feared dead while many injured have been rushed to nearby hospital. The bus conductor also has received injuries.

The mishap occurred at 8am today morning. Bus number SK 01 B 0241 is reported to be a 35 seater bus which had around 29 passengers in it, but the same cannot be confirmed until search is complete if any body is lying in the gorge. Rescue work is going on. 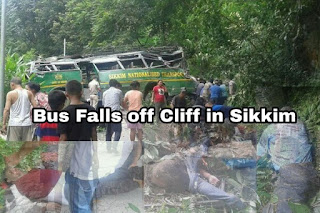