- August 10, 2017
The Kanchenjungha Stadium in Siliguri is likely to host the season's first derby between East Bengal and Mohun Bagan as the two rivals battle for honours in the CFL Premier Division.
The date of the high-voltage match is yet to be finalized but IFA general-secretary Utpal Ganguli asserted that it would be held next month and won't be the concluding match of the league.
"With the Salt Lake Stadium not available due to the under-17 World Cup, venue remains an issue for hosting the big match. As things stand now, it may be held in Siliguri," Ganguli said during a news conference here on Wednesday, while announcing the fixtures for the first three rounds of the local league.
"The stadium at Kalyani is going through some restructuring. We'll visit the venue soon. If satisfied, we are leaving the options open of holding other big matches (East Bengal vs Mohammedan Sporting and Mohun Bagan vs Mohammedan Sporting) there," he added.
The CFL Premier Division winners will take home Rs 25 lakh while the runners-up will pocket Rs 20 lakh. Apart from the man-of-the-match awards, worth Rs 5000 for every game, the IFA is also planning to introduce a man-of-the-tournament award this season.
East Bengal, champions for the last seven seasons, will kick-start the tournament with a home match against newcomers Rainbow AC on Saturday. Mohammedan Sporting Club (MSC) will face Patha Chakra at Barasat the next day, while Mohun Bagan will host Southern Samity on Monday.
Peerless SC, Railway FC, Calcutta Customs and Tollygunge Agragami are the other teams in fray.
Nilesh Bhattacharya | TNN
TOI 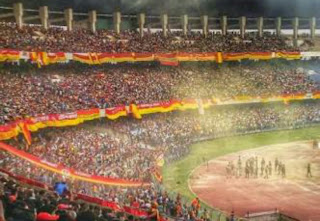