- August 14, 2017
Siliguri: Rail and road communication was severely hit and over five lakh people affected in northern West Bengal with major rivers in spate as the flood fury triggered by heavy rains claimed three lives with one person missing, officials said on Sunday.
The deaths were reported from the worst-hit Cooch Behar district, where 100 out of 128 gram panchayats were inundated following incessant monsoon rains since Friday.
One person was missing in North Dinajpur district, with eyewitnesses saying the victim was drowned.
Around 2.87 lakh people were affected in the deluge in Cooch Behar, and aanother two lakh in Jalpaiguri and Alipurduar districts. Over 50,000 were hit in Malda, North Dinajpur, Darjeeling and South Dinajpur districts.
The district administrations have opened over 700 relief centres - 550 of them in Cooch Behar alone - to shelter the homeless.
The red signal has been hoisted at a number of places with the Teesta, Torsa, Raidak, Kaljani and Mansai rivers flowing among the danger mark, as the inclement weather continued.
Cooch Behar was virtually cut off from the rest of India, with vehicular and train movement coming to a stop following inundation of railway tracks and national and state highways.
Cooch Behar, Toofanganj and Dinhata blocks were worst affected.
The National Highway 31 was under water at Maruganj of Toofanganj block, while the Mansai has breached embankment in ward seven of Mathabhanga town.
Speedboats and country boats have been deployed while National Disaster Response Force personnel were engaged in rescue operations in Cooch Behar, Alipurduar and Jalpaiguri districts.
In Jalpaiguri district, the Jaldhaka diver caused inundation at Gajong under Dhupguri block. Eight municipal wards in Dhupguri town were also flooded.
The Teesta submerged Gajoldoba, while the guard walls of National Highway 31 at Neelampalli developed cracks.
In Darjeeling district's Siliguri sub-division, most parts of Naxalbari and Matigara blocks were under water.
Train commuters had a harrowing time, with a large number of mail, express and other passenger trains cancelled, stopped, rescheduled or short-terminated.
The 12343 Up Darjeeling Mail, that left Sealdah for New Jalpaiguri on Saturday night, was stopped at Murarai in the early hours of Sunday, and after an agonizing ten hour wait, was brought back to Sealdah.
A Northeast Frontier Railway release said the situation aggravated on Saturday night when rain water submerged tracks near Dalkhola, Barsoi, Sudhani stations and the main line connecting NE India with rest of the country got blocked with water under a bridge near Kishanganj station flowing over danger level.
Monday's 15903 Dibrugarh-Chandigarh Express and 15636 Guwahati-Okha Express have been cancelled, the release said.
Twenty mail, express and other passenger trains including 12423 Dibrugarh-New Delhi Rajdhani Express have been cancelled. (IANS) 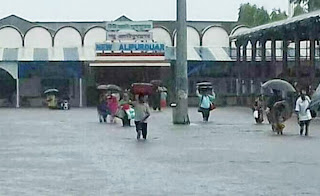