- August 04, 2017
The CID has filed the first chargesheet against four accused in connection with the fake doctors’ racket case.
The chargesheet was submitted at Bidhannagar Court on Tuesday, CID officers said. “Four accused, Kaiser Alam, Khusinath Haldar, Snehashis Chakraborty and Ramesh Chandra Baidya, have been booked under various sections of IPC, including fraud and cheating,” said ADG (CID) Rajesh Kumar. They have been booked under IPC sections 419 (cheating by personation) , 420 (cheating and dishonesty) ,467 (forgery of valuable security), 468 (forgery), 471 (using as genuine a forged document), 472 (possessing counterfeit seal) and 474 (possession of any document knowing the same to be forged).
Investigation into the fake doctor’s racket had led CID to a ‘fake medical board’. The alleged kingpin of this racket Ramesh Chandra Baidya (52) was arrested from Kolkata airport in May.
Baidya had allegedly provided fake degrees to a huge number of students from USA, Italy, Srilanka, Nepal, Bangladesh, Russia, Malaysia and Africa. He also allegedly provided fake medals in exchange for money.
The other accused Khushinath Halder (52) had allegedly collected forged certificates from Baidya’s ‘fake medical board’. Apart from Haldar, CID had also arrested Kaiser Alam (36) from a primary health centre (PHC) in Chopra block of North Dinajpur, where he had been working on a contract basis under the Centre’s National Health Mission scheme since September 2011.
Haldar and Snehasish Chakraborty (34) were arrested on the basis of Alam’s statement to police. While Alam had allegedly furnished fake documents to get a job at the health centre in Chopra, Haldar and Chakraborty — who worked at PHCs in Alipurduar’s Madarihat and Jalpaiguri’s Dhumpara respectively — were allegedly appointed without any documents. All three worked under the National Health Mission scheme for over six years and were practising as doctors for over 10 years. They were drawing a salary of Rs 40,000 to Rs 50,000. While Alam hails from North Dinajpur, Haldar is from Alipurduar and Chakraborty is a resident of Kolkata.
By: Express News Service 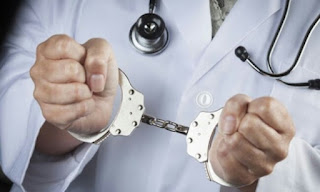