- August 11, 2017
Accident at Chanatar near Rangpo in Sikkim. Vehcile White Bolero SK 01 P 8692 plunges into the Teesta river. Accident took place around 2 PM. Football jerseys were found is reported.
Update: Vehcile had football players who were heading towards Rorathang for match. Boots, Jersies ,Stockings etc were  found. However how many were present is still unfound.
Update : 5 were in vehicles two rescued, 3 missing. It's reported they are IRBn.
Prabin Rai alias Saila and team has started rescue. Two passanger has been drifted by raging Rangpo river is reported.
Sikkim Police , Civil Defense , Fire Tenders have on rescue operation.
Report by Dipak Gurung 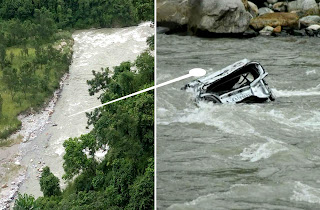