- August 03, 2017
Two women from Jhapa district of Nepal in Birtamode have died of swine flu in the last two weeks.
Anita Devi Mittal of Birtamode-4 and Manisha Agrawal of Birtamode-1 breathed their last during the course of treatment at the Apollo Hospital in New Delhi, India.
They were first admitted to hospitals in Siliguri and later referred to Apollo Hospital.
Mittal died on July 16 while Agrawal on July 30, it has been learnt.
As the cases of outbreak of swine flu, also known as H1N1 influenza, has surfaced in the district, locals here are worried about it, according to Dr Pitambar Thakur, Chief at the Mechi Zonal Hospital in Bhadrapur.
Swine flu was first originated in domesticated swine and later transmitted from person to person.
Symptoms are similar to common cold such as continuous sneezing, coughing, runny nose and sore throat among others, shared Dr Thakur, urging people to take preventive measures against it. 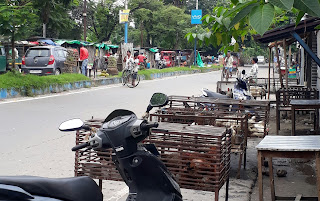 In picture chicken sold openly on roadsides near Champasari in Siliguri.