- August 07, 2017
Malda: The Border Security Force personnel seized fake Rs 2,000 notes with face value of Rs 92,000 from West Bengal’s Malda district and detained a man carrying it, a BSF official said on Monday.
Acting on a tip-off, the BSF troopers from Malda district’s Kaliachawk kept vigil at three important intersections in the area since Sunday afternoon and detained a man with fake notes from near Baliadanga in the evening, an official said.
Samayon (40), a resident of Kaliachawk’s Mohabatpur village, was detained by the BSF around 7.40 p.m. on Sunday, ARPS Jaswal, Director General of BSF’s South Bengal Frontier. said in a press release. “A bundle of 46 fake Rs 2,000 notes of the face value of Rs 92,000 was seized from him.” 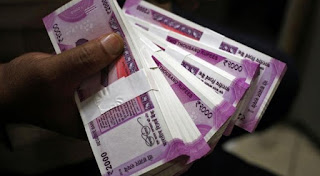