- August 01, 2017
A single story building with asbestos roof was blown up when about 200 crude bombs stockpiled by an alleged criminal inside the structure went off accidentally in a Birbhum village this morning.
No one was in the house when the explosion occurred at Demutita in Lokpur, about 50km from Santiniketan.
The additional superintendent of police, Jobi Thomas K, said: "The blast occurred accidentally. We have started an investigation."
Residents of Demutita said the house was being used by a former Trinamul worker, Sheikh Samirchand, to manufacture and store crude bombs for the past two years.
Birbhum police have been carrying out raids to recover stocks of bombs following an instruction from chief minister Mamata Banerjee in May.
The villagers said they had heard an explosion around 9.30am today when most of them were working in paddy fields. When they rushed to the spot, they found that the one storey house belonging to Samirchand was reduced to rubble.
"Samirchand built this building three years ago and used it to manufacture and store bombs. He was involved in extortion and other criminal activities since he joined the Trinamul Congress. So, he was expelled from the party a year ago," said a villager.
A police officer said a search was on to round up Samirchand. "The man who stored bombs in a house is a notorious criminal and backed by a Trinamul's faction," said the officer. .
Sukumar Banerjee, the block president of Trinamul at Khoirasol, said Samirchand had no connection with the party. "He was a local criminal who dealt with bombs and arms," said Banerjee.
Telegraph
Picture: Police inspect the rubble of the house blown up in the blast at Demutita in Bolpur on Tuesday. 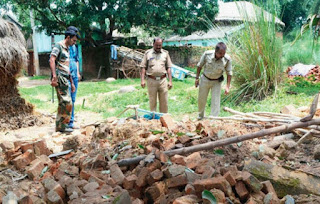