- August 04, 2017
The Directorate of Revenue Intelligence (DRI) on Thursday booked a suspect at Netaji Subhas Chandra Bose International (NSCBI-CCU) airport in Kolkata and recovered 9.96 kg gold worth nearly Rs. 3 crore from his possession, officials said on Friday.
According to reports, DRI officials and Central Industrial Security Force (CISF) personnel intercepted a person, soon after he arrived at NSCBI airport from Aizawl in Mizoram onboard a Jet Airways flight (9W-624) on Thursday afternoon, and made the huge seizure.
"We detained a 27-year-old man from Mizoram, Zonunsanga, and seized 6 gold bars, weighing 1.66 kg each, from his back pack," a DRI official said. "The market value of the gold bars is approximately Rs. 3 crore."
Later, the person was arrested under Section 104 of the Customs Act. 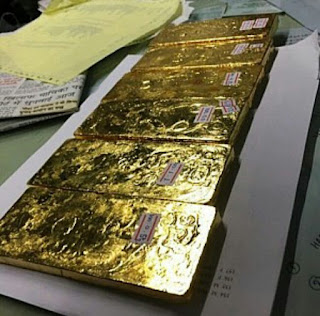 DRI team further said, “The person arrested in this case was found to be well educated. He had studied at Delhi University. He confessed to falling for the lure of easy money being offered to carriers of such smuggled gold by organised smuggling syndicates”.