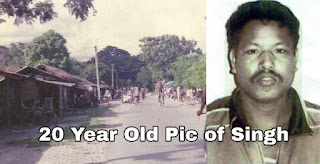 Jalpaiguri: Where is Kamtapur Liberation Organisation chairman Jibon Singh? That is the question doing the rounds after police learned on Monday that his wife and children had been living in Nepal for the past several years and not Myanmar where they were believed to be in hiding.
Jibon's wife Bharati Das (48) and their daughters Tithi (11) and Preeti (8) were dumped at North Bengal Medical College grounds late on Sunday by an ambulance that had transported them from Nepal. By the time doctors attended to Bharati, she had died of multi-organ failure.
Bharati, who hailed from Kumargramduar in Alipurduar district, was wanted by police in connection with several cases and had been absconding for 13 years.
Suspecting something was amiss from the manner in which the mother and her children had been hastily left by the ambulance, NBMCH authorities informed Matigara police. Soon afterwards, the body was confirmed to be that of Bharati.
While cops had earlier believed Jibon and Bharati were in Myanmar, they now realise Das has been living in Nepal with her two daughters. "The girls speak in chaste Nepali and broken English. They cannot speak Bengali. They have grown up in Nepal. KLO has a strong link with Maoists in Nepal and the latter might have made arrangements for Bharati's stay in the country," a senior cop said.
Early on Monday, cops informed Jibon's younger sister Sumitra about Bharati's death. A former KLO cadre, Sumitra along with her husband Dhananjoy Roy, another former KLO militant, reached the hospital. Dhananjoy had been held in an army operation in Assam and was jailed. He returned to the mainstream after his release. The body was taken to Kumargramduar and cremated late in the evening.
"Although police have handed over the two girls to Sumitra, some formalities are still pending and will be completed within a couple of days," said Milton Barma, a former rebel.
Bharati had married Jibon in Bangladesh after the Bhutan offensive that was carried out in 2003 against anti-India insurgent outfits. Bharati's parents are still alive and live in a Kumargramduar village.
By Pinak Priya Bhattacharya | TNN | TOI
Jalpaiguri