- July 04, 2017
When 16-year-old Sandhya Rai, hailing from Saraswatipur tea estate near (Belakoba) Siliguri under Jalpaiguri district, learnt that she was selected to represent the country's Under-18 girl's rugby team at the Paris World Games to be held from July 8-9, she was beaming with delight. But after the initial ecstasy settled, she began to ponder the enormity of the achievement.

Sandhya, along with four other girls from the tea-plantation village of Saraswatipur - Rima Oraon, Lachmi Oraon, Punam Oraon and Suman Oraon - have come a long way from trying to convince their parents to allow them play the sport to being the first from their village to travel abroad. And yeah, their surnames may be similar, but they're not related, they just belong to the same tribe.

Five years ago, the Get Into Rugby programme held a sports camp in their village and invited girls to play the sport. Their aim was just to introduce girls to the sport. The girls, used to playing kabaddi and kho-kho, took to the game brilliantly. The only problem was this - their parents, who are tea plantation workers, had no idea that they were playing the sport.

When the girls told them, they were quite apprehensive. "My mother was worried because it was a contact sport, and also, she never saw me play a 'real sport' like this," Punam said on Tuesday. Lachmi's mother was concerned about the attire. "My parents could not believe that girls had to wear shorts. She just couldn't understand the need for that," Lachmi said.
But the girls backed each other and within a year and a half, they got better at the sport. Time came for the girls to go to Odisha to play a club tournament. That's when they faced their biggest obstacle.

"My mother wasn't allowing me to go. She didn't trust the club and even said that they (the club) would sell us in the name of taking us for the tournament. It was like a dead end for us," said Sandhya.

Eventually, after lots of coaxing, they managed to convince their parents to let them go and that was the start of something great. Though they didn't do well at that tournament, their talent was recognized. That only meant that the girls had to travel to the main city of Siliguri to participate in tournaments. But back in the village, they still had to convince the elders that they were doing something great.

"Everyone used to make fun of us saying that we were not actually going to Odisha to play tournaments, and that we were just fooling them and going for picnics," said Rima.

It was only after they won a tournament last year and paraded the trophy around the village that they finally started taking them seriously.
In June this year, Rugby India held selections in Kolkata for the Paris Games. The five girls made the cut with ease and the organization helped them get the travel documents in place.

"Our parents couldn't believe it. We are going to be the first ones from our village to travel abroad. I don't think they could be happier," Sandhya said.

And what are the girls thinking about their impending trip?

"Firstly, we just want to play well and win the tournament. Then we want to walk around Paris. I can't believe that we'll get to see the Eiffel Tower," said a clearly delighted Suman.
Apart from these five girls, the team of 12 that leaves on Wednesday night for the Games has five girls from Odisha and one each from Maharashtra and New Delhi.

In picture: It will be the first time West Bengal's (L-R) Sunam Oraon, Lachmi Oraon, Rima Oraon, Punam Oraon and Sandhya Rai will be travelling abroad. 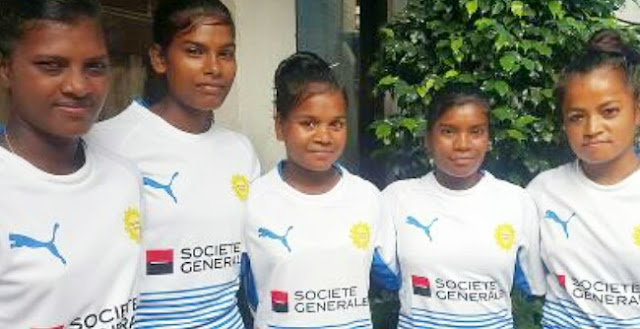