- July 28, 2017
Kolkata: An illegal arms factory was unearthed in the city's Tiljala area and five persons were arrested for their alleged involvement with it, police said today.
Acting on a tip-off, a police team conducted a raid at a residence in Tiljalas Gulshan math area late last night, a senior police official said.
We have arrested the owner of the building and four more persons in connection with the factory. Several arms including country-made pistols and a machine used for the manufacturing of arms were seized. We are conducting a thorough investigation into the matter, he said 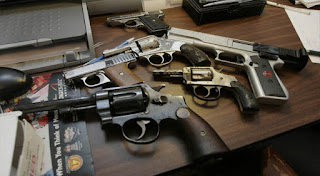