Food served by Indian Railways not fit for humans

- July 22, 2017
The CAG has said that food served by the Indian Railways to its passengers in the trains and at stations is not fit for human consumption.
The Comptroller and Auditor General (CAG) of India has said in its audit report that the food served by the Indian Railways to its passengers is unfit for consumption by humans.
The CAG has pointed out several loopholes in managing the catering services. It has pulled up the Railways for mismanagement of catering services, poor quality food and monopolisation that has led to compromise in quality.
CAG REPORT ON RAILWAYS FOOD: THINGS TO KNOW
Joint inspections by audit teams exposed inefficiency and malpractices relating to hygiene even a survey by the audit exposed that 75 per cent of the passengers felt hygiene and cleanliness was either average or poor.
The CAG has pointed out the shocking reality that the articles that are being provided at railway stations and in trains are unfit for human consumption.
Fruit juices, biscuits and flavoured milk being sold at railway stations were found to be unsuitable for human consumption in the inspection by CAG team.
The CAG also said that contaminated food stuff, recycle foodstuffs, expired packages and bottled items, unauthorised brands of water bottles were accepted and offered for sale inside station premises and trains.
It was found that purified water was not available at 21 stations across 11 railways zones. Dirty water was being used for beverages like coffee, tea and soups in 22 trains.
Water used for cooking purposes was not purified. The general railway water supply was being used for cooking in some trains. No hand gloves and caps were being used in the kitchen at 32 stations across 13 railway zone.
Food infested with flies insects and was found in one of the inspections. Food was not covered to protect from flies insects and dust in three stations. Cockroaches and rats were also seen in pantry cars in trains including Duronto Express.
On one occasion, a passenger of the Lucknow-Anand Vihar double decker train ordered a cutlet only to receive it with an iron nail inside it.
Unsold paranthas were being recycled in the base kitchen in trains including on Kanpur-Delhi express. The CAG said that there seemed to be no mechanism to check that waste food was not recycled.
The CAG said that the complaint redress system is defunct. Even though the number of complaints has not reduced, no action has been taken over the years. Major complaints regarding catering services in the trains are related to overcharging and poor quality of food, the CAG report said.
Mausami Singh, India Today 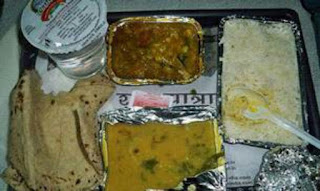