- July 07, 2017
A tragic blast in a house near Bhadreshwar police phari in Hoogly on Friday has left the people of that area in a great shock . Two Fire tenders reached at the spot.
It is repotedly said that the intensity of the blast was so high due to which three concrete buildings of that affected area collapsed. A woman named Hasina Bibi was seriously injured in this incident and admitted to Chandannagar Sub Division hospital.
Locals said – The blast happened on Thursday evening when Mohammad Islam (Kalu), who was illegally making fire crackers in his house. The intensity of the blast was so high due to which two houses of the area including Kalu’s house collapsed and some houses were damaged. Two Fire tenders reached at the spot.
After a primary investigation police said, the explosion occurred after the gas cylinder exploded in the house with the spread of fire. Meanwhile, police started investigation about the incident. Accused Mohammed Islam is still absconding.
Locals of Bhadreshwar showing their anger at police said that why did police not kept an account of such an illegal work of making fire crackers in a residence in the area, this kind of incident also happened before, government should be more alert about this kind of illegal works. 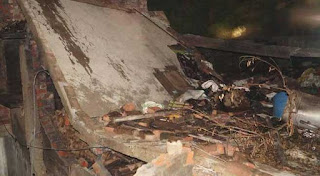