- July 15, 2017
Some four elephants including a tusker went on rampage at New Chumta Tea Garden near Sukna today morning at 3am.
First they arrived in the garden at 10pm and started eating jackfruit from nearby trees. Again they came back at 12 and did the same and went back.
Later they came at 3am and destroyed a garden staff quarter and uprooted tea shrubs. Locals with the help of fire crackers chased them away.
Locals allege that they called forest department several times but received no response from them.
Elephants come here almost every night said a tea garden labour, but it's sometimes only that they destroy houses in search for food.
Sumit Biswas for ILS 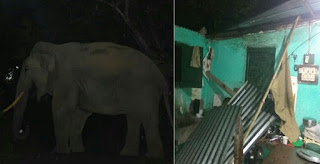