- July 01, 2017
THE CID on Saturday seized 74 kg of Manipuri cannabis, worth around Rs 14 lakh, from Durgapur and arrested five persons in this connection. On a tip-off, the special operation group of the CID seized the drugs before they could reach the receiver, sources said.
The accused have been identified as Sanjoy Gorh, Abdul Kayum, Jaguram Bora, Milon Debnath, all residents of Assam, and Binod Paswan of Burdwan.
“Four Assamese and one Burdwan resident have been arrested in the case from Kanksa area in Durgapur,” ADG (CID) Rajesh Kumar told The Sunday Express.
Sources said the five accused had come to Siliguri from Assam. They were on their way to Burdwan when they were arrested, they added.
The four accused from Assam are apparently carriers who were going to deliver the drugs, sources said, adding that they are looking for the main culprits. “Locals easily get interested to work as carriers as it fetches good profits. The basic price (of the drug) is comparatively low but once it crosses the state borders, the price keeps increasing,” said a police official.
Official sources said that Manipuri cannabis have a lot of demand across the country. These are sourced from Manipur and Nagaland and then trafficked via Assam to different parts of the country, especially north India, they added.
Via The Indian Express 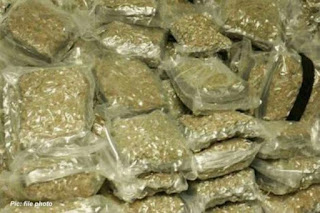