- July 31, 2017
About 15-20 Chinese troops entered 1 km into Uttarakhand's Barahoti sector this month, officials said on Monday. The transgressions came in the middle of a prolonged military standoff between the two nations in the Sikkim sector.
The first transgression took place on July 15 and the second one on July 25, only a day before National Security Adviser Ajit Doval left for Beijing to be part of a BRICS meeting.
In the second incident, Chinese troops also threatened shepherds and asked them to leave along with their animals from the area, sources said.
However, Indian security officials downplayed the incidents, saying they were "routine" happenings. Chinese troops left Barahoti soon after the Indian side protested, sources said.
Since mid-June, a military standoff continues between Indian and Chinese troops in Doklam — a disputed tri-junction where the borders of India (Sikkim), China and Bhutan converge.
After PLA troops entered the plateau in Bhutanese territory to build a road, Indian soldiers intervened, citing agreements between the three countries to maintain a status quo in the region. China has maintained an aggressive stand and accused India of entering its territory.
Talking about the Uttarakhand transgressions, official sources said that incidents of similar nature have happened in the past but are normally sorted out locally and should not be given undue importance.
Transgressions occur due to differing perceptions of the Line of Actual Control (LAC) by the two sides. Such incidents have been taking place for years, said a security official.
In July last year, Chinese troops had transgressed into Uttarakhand's Chamoli district.
Barahoti, about 140 km from Uttarakhand's capital Dehradun, is a "demilitarised zone" where Indo-Tibetan Border Police (ITBP) jawans are not allowed to take their weapons.
In 1958, India and China listed Barahoti as a disputed area where neither side would send troops. In the 1962 war, PLA did not enter the 'middle sector' including parts of Uttarakhand and Himachal Pradesh and were actively focused in the western (Ladakh) and eastern (Arunachal Pradesh) sectors. 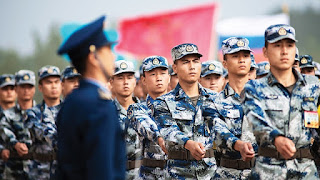