- July 29, 2017
The flood situation in West Bengal has become worse after the Damodar Valley Corporation released more water from its dams.
Inclement weather and flood have badly affected people in as many as 12 districts of West Bengal, but in Malda and Murshidabad districts — which share more than 300km of the international border with Bangladesh — the deluge has come as a boon for cattle smugglers.
Of the 300 km of the border the two districts share, around 100km is covered by rivers, including the Ganga and the Padma, which are overflowing at this time, and cattle smugglers are taking full advantage and smuggling more cows into Bangladesh through the porous border.
Because of heavy rainfall upstream and release of water from dams in the western districts, the level of water in the two rivers has risen alarmingly.
Since vigilance has been affected by the inclement weather, smuggling of cattle, narcotics and essential items that are in demand in Bangladesh have increased, said district police officials.
A senior officer of the Border Security Force said that during the rainy season, the grass along the rivers and on the sand beds grows taller in a very short time.
Smugglers hide their goods in these sand beds during the day and smuggle these into Bangladesh at night. The grass gets so tall that even cattle can be hidden in the thick bushes, said the officer.
Speaking on condition of anonymity, a man involved in cattle trade in Murshidabad said cows and buffaloes can swim well and the smugglers manage to cross the rivers with the animals even though the current is strong.
A district police officer said cattle is being smuggled into Bangladesh from Suti, Raghunathganj, Jalangi and Raninagar areas of Murshidabad.
By Sreyasi Pal, Hindustan Times, Berhampore 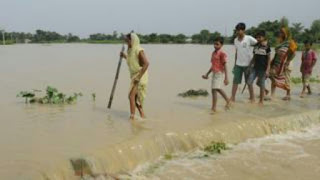