- July 15, 2017
To acquaint travellers with the local flavour of the place, airports today are being redesigned to provide a piece of India’s rich heritage and culture.
A country as diverse as India is symbolised by the plurality of its culture and heritage. This is further enriched by myriad forms of local art which is an embodiment of its cultural diversity as each one is quintessential and inimitable from the rest. Today airports are not just transport hubs but destinations as well. Since airports are the natural gateways and often the first point of contact with the local destination for travellers, it is imperative that the experience of a traveller must be memorable and long cherished. In an effort to enhance passenger experience which can connect foreign visitors with the local region and its community, there is an imminent need to create a sense of place within the airport by reflecting the unique identity of the local area.
The sense of place is a unique collection of qualities and characteristics – visual, cultural, social, and environmental – that defines a location. Zürich Airport is a great example. Going from one terminal to another, travellers notice cow noises, yodeling and an animated Heidi, giving them a flavour of Switzerland.
BAGDOGRA AIRPORT At the Bagdogra Airport in West Bengal the AAI team undertook an endeavour to recreate the environment of the area with tea, mountains, local handicraft of Darjeeling and Sikkim, the iconic "toy train" of Darjeeling, music and dance of Bengali and Nepali culture, local food to Gujarati tourists who flock in large numbers and the ever-present Khata – the traditional ceremonial scarf to represent the giver's goodwill and regards to the recipient. The concept of creating a sense of place is best exemplified by Moutat – bringing the tea gardens to the Bagdogra Airport.
Moutat is an initiative by a group of four women who want to bring out the best of the culture of the region and present it to the people by serving a free cup of Darjeeling tea to every passenger boarding flights from the Bagdogra Airport as a 'Welcome Drink.' The aroma and taste of Darjeeling tea is unparalleled. The basic motive behind serving tea is to introduce visitors to the flavour of the region. In order to promote the culture of Sikkim and present it to tourists through everyday lifestyle products; which are authentic often referred as souvenirs of the place, Bagdogra Airport has collaborated with SIKKIMIS, an off-shoot of B.R.E.W (Bakery, Retail, and Event &Workshop). Each of the products is inspired by some aspect of Sikkimese life allowing tourists to take a piece of the beautiful hills back with them.
Bagdogra Airport has an outlet of ARTMART, an art gallery where they promote local artists and display paintings on local themes, such as tea gardens, mountains and the wildlife of Dooars. All paintings are 100 per cent hand painted, as artists and communities do not use any rouge techniques to make them – like canvas prints, canvas transfers, or painting on prints. The gallery not only creates a 'sense of place' but also beautifies the ambience of the airport. The airport proudly hosts an outlet of Biswa Bangla in the waiting area. Visitors to the showrooms are tacitly enlightened on West Bengal's heritage art and craft forms.
TIRUPATI AIRPORT AAI airports are already working on the same as can be seen at Tirupati Airport in Andhra Pradesh, where the newly integrated terminal building of the airport referred to as Garuda Terminal was constructed on the historic importance of the place. The building is a blend of a modern steel structure imbibing its form from Garuda, with artworks showing the heritage and significance of this temple city. The installations have been selected in different mediums – painting, cement relief, fiber, ceramics etc to create different auras in different spaces. The passenger terminal building at Tirupati Airport is a graphic interpretation of the form of Garuda with its association as the carrier of Lord Venkateswara, an avatar of Lord Vishnu and its co-relation with the concept of flight. The imposing structure of the terminal building has been designed, deriving inspiration from the shape of Garuda (Eagle) in-flight with its wings spread across air. Garuda is the vehicle of Lord Vishnu, whose temple is popular in India as well as abroad. A beautiful sculpture of Garuda made of bronze is placed in the check-in area. As a backdrop over the check-in counters, a 2D relief work in fusion with paintings depicting a beautiful story showing the Das-Avatar of Lord Venkateswara is displayed. This artwork occupies the central part of the building and the earthen colours are visually soothing to the human eye. The artwork at the baggage claim area depicts the culture and heritage of Hampi during the reign of King Krishna Devaraya. The intricate details interwoven with the story of the Krishna Devyaraya period creates a beautiful ambience. The magnificent work done at the Tirupati Airport should be seen in the light of conceptualising and revamping of airports with innovative ideas.
Read more at: http://www.millenniumpost.in/sundaypost/routes/airports-now-showcasing-local-flavour-252589 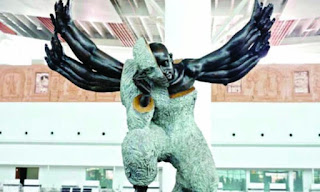