- July 28, 2017
A middle aged man was stabbed near Siliguri College today morning around 10.30 am as per sources.
Locals rushed the injured man to hospital who was in very critical state.
Sources say the man succumbed to his injures in the hospital. The culprit was caught by the public, thrashed and tied up with rope so that he does not escape.
On the murder scene the but of a knife has been seen along with the bag the victim was carrying.
Update: Confirmed by Siliguri hospital that the person stabbed is no more.
Victim Name - Ratan Das
Accussed Name - Madan Das
Both are residnt of Rabindra nagar Siliguri
Accussed said the victim was the reason of his mothers death that's why he killed him. They both are neighbours. Police have arrested the accused, investigation underway. 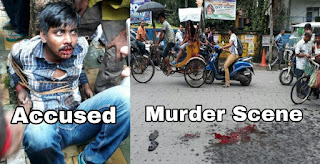