A person sentenced to 10 years imprisonment and fine of Rs 10,000  in an arms case in Sikkim 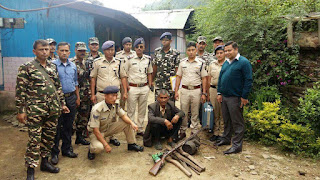