Why this Dooars ranger is called van (forest) Singham?

- June 06, 2017
Forest range officer Sanjay Dutta's workplace can be mistaken for a retirement home of cars. Rusty Innovas, ageing Taveras, dusty WagonRs -more than 20 vehicles stand in the office premises, weeds and shrubs growing around them over weeks and months. All have been seized from illegal wildlife traders and timber thieves from the towns, kasbahs and jungles of north Bengal.
"In the last eight years, we've arrested at least 200 poachers and more than 300 timber smugglers. I love my work. I love the jungle," says the 38-year-old who grew up in and around forests, the son of a former ranger.
Dutta heads an armed task force for undercover operations to control poaching and illegal wildlife trade in the region. Confiscations include tiger and leopard skins and bones, ivory , rhino horn, pangolin scales and highpriced snake venom too. His cache also has python skins, red sand boa, gecko and sea cucumber.
The hauls have come at a price. Dutta has been shot at by the timber mafia and escaped being trampled by an angry elephant. He has lost a colleague during an operation to nab timber robbers. Last year Dutta received the Clark R Bavin Wildlife Law Enforcement Award "for dedicated efforts to extinguish wildlife crime and illegal trade, including his work to successfully end timber trafficking in his district and combat rhino poaching." In 2017, Bengal's government honoured him with `Best wildlife protection award'. 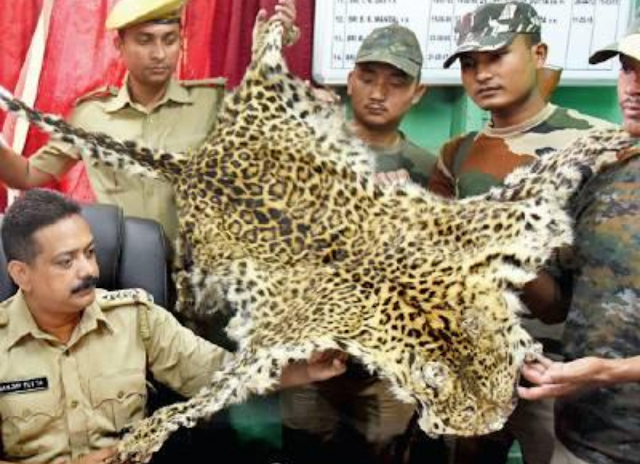 His exploits and the awards have made him a local star. "He is an efficient and effective officer. Some call him van (forest) Singham," says local journalist Shantanu Kar. The moniker comes from the Ajay Devgn film where the protagonist is a no-nonsense cop of the same name. Adds Tito Joseph of Wildlife Protection Society of India, "He is a quality enforcement officer who works in difficult terrain vulnerable to illegal border trade."
Like the flamboyant cop in the movie, Dutta too flaunts a strong mous tache and isn't averse to strong-arm tactics. In 2007, an operation to apprehend timber thieves ended in tragedy . Dutta recalls how an informer had alerted him to the arrival of three boats with illegal timber near Gajoldoba bar rage on river Teesta. The raiding party nabbed three smugglers. "But the river claimed a colleague Kalukanta Roy .I took help from Bangladesh authorities. But the body was never found. I still see myself as an offender. I'll regret the incident till I die," says Datta, who looks after 3,300 hectares of protected Baikanthapur forest. "We didn't have life jackets then; now we do."
Dutta's area includes the brisk and bustling town Siliguri. "Siliguri is a trade centre for illegal wildlife, more so for its proximity to Bhutan, Nepal and China," says Joseph. Recent arrests of poachers or their conduits suggest a global network of armed smugglers.
In 2014, Dutta survived an exchange of bullets with one such gang. "On the Bengali New Year, a bunch of goons were loading a truck with chopped tree trunks on the Gajoldoba canal road.They fired at me. I fired back. Luckily ,I wasn't hit," he says, in his office in Belakoba, a kasbah in Jalpaiguri district.
Over the years, Dutta understood that efforts to protect forests cannot be fruitful without local support. His offensive's success against poachers and timber thieves depends on a quality network of informers. Having villagers back him is critical. To this end, he's helped set up a beauty training school, a cottage-industry where saalleaf plates are made and a children's school in Nodhabari village. "He's been helping us out in various ways," says Kalu Rai of Nodhabari.
In his adventurous high-risk life, Dutta's closest shave with death came not during a raid but from a wild tusker that had strayed into the Joypur tea garden near Jalpaiguri in 2016. Forced to confront the ferocious tusker, the ranger fell on a tea bush, hurting himself badly . He recalls the incident vividly: "I was lying on the ground at the elephant's mercy . I could see its bloodshot eyes. But it had second thoughts, and just walked away . I survived with six broken ribs. If you do something to protect wildlife, it'll give you something in return," is his take.
TOI
Dooars