- June 05, 2017
Since late eighties the four municipalities of Darjeeling, Kurseong, Kalimpong and Mirik in Darjeeling hills have always been ruled by local parties Gorkha National Liberation Front (GNLF) and Gorkha Janmukti Morcha (GJM).
West Bengal chief minister Mamata Banerjee on Monday decided to take the Bimal Gurung led-Gorkha Janmukti Morcha (GJM) head on and announced a special audit of the GJM-run Gorkhaland Territorial Administration (GTA).
Banerjee made the remarks hours after being greeted in the hills with black flags by supporters of GJM.
“We’ll conduct a special audit of GTA. If malpractices are found, the law will take its own course. If they are working good, they’ll be rewarded,” Banerjee said, addressing a public gathering at Mirik, the first civic body in the hills to be electorally conquered by a non-hills party.
Elections to the 45-seat autonomous body GTA will take place in a few weeks.
This was Banerjee’s first visit after Trinamool won the civic body election in Mirik last month.
By Pramod Giri, Hindustan Times, Darjeeling 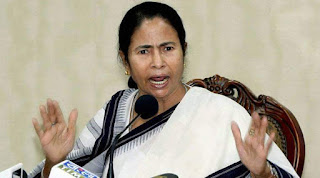