- June 03, 2017
The CID on Monday unearthed an illegal firearms factory at Rabindra Nagar in South-24 Parganas and seized a huge cache of weapons.Three persons have been arrested in connection with the case. The factory was operating from the ground floor of a house owned by a local resident identified as Goutam Roy (52). On a tip-off, the CID carried out a raid jointly with local police and busted the factory. Thirty-eight semi-finished pistols and some arms-making equipment were recovered from the house, sources said.
“This place was mainly being used by manufacturers to assemble the weapons for supply to the market. The weapons are mostly from Munger in Bihar. We are trying to break the entire nexus,” ADG (CID) Rajesh Kumar told The Indian Express. Besides Roy, two of his aides — Mohammed Nasrul (28) and Mohammed Sabbir Alam (30) — were arrested.
CID sources said Nasrul and Alam are from Munger district in Bihar, which is infamous for manufacturing of illegal weapons. All the three accused have been remanded to 10-day police custody.
“We have recovered 38 pieces of 7.62 improvised automatic pistols fitted with magazine and extra 38 pieces of magazines apart from a huge quantity of other accessories used for manufacturing arms from the house,” DIG CID (operations) Nishat Parvez told The Indian Express.
Sources said that house owner Roy has a huge three-storey house in the area. The ground floor was being used for assembling arms. Locals were clueless about the illegal operations going on there as they knew it was given on rent to some labourers.
This is, however, not the first time when Rabindra Nagar has been in news for such an incident. Last year in September, the district police had busted a similar arms-making factory at Kankhuli. The factory was being operated under the garb of tailoring and grocery shops. Four accused were arrested in that case. Three of them were from Munger. Following the incident, police had busted similar arms-making factories twice in the area last year.
“Rabindra Nagar has become a ‘mini Munger’. It is a minority dominated locality. The ‘karigars’ of Munger are easily available and they are masters in manufacturing arms. They can be hired at cheap cost. The demand of Munger weapons is high in West Bengal. To evade risk of direct supply of arms, goons are coming up with factories who are involved in assembling arms,” a CID official told The Indian Express.
In another incident, Kolkata Police busted two arms factories in Howrah on Tuesday. Police seized 30 pieces of semi-finished 7 mm pistols from the residence of one Shamsud in Noor Mohammed Munshi Lane. Shamsud is absconding. Another arms-making factory in Howrah’s Srinath Poral Lane was also busted and eight 7 mm pistols were seized from there.
The Indian Express 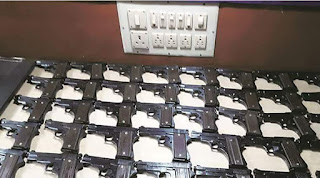