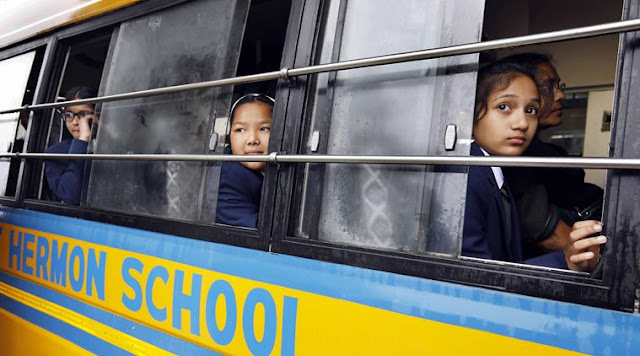 As rows of school buses leave Darjeeling since 5 am, thousands of happy students streamed out of the Hills as Gorkha Janmukti Morcha granted a 12-hour window amidst the indefinite strike. Students from not only different parts of India but also from Nepal, Bhutan, Hongkong, Thailand and Bangladesh were stranded in the Hills.
Meanwhile, Gorkha Janmukti Vidyarthi Morcha checked each identity cards and maintained a register of all students. “We set up pickets at the major crossing. Checked identity cards and maintained a register for all students. We then helped the buses to leave the Hills,” said Anmol Thapa, central committee member of Gorkha Janmukti Vidyarthi Morcha (student’s wing of GJM).
Students of famous boarding schools like St Paul’s, St Joseph’s, Mt Hermon and others were seen ready by the wee hours to leave the Hills. Happy students hugged each other and exchanged wishes as they boarded the buses. “We are so happy and excited. Usually, our parents come and take us from the schools. But now we are all going together in a school bus. We were ready and packed since the wee hours,” Damayanti Devi, a class eight student of Mt Hermon and a resident of Guwahati.
Rows of buses were seen leaving the different schools in Darjeeling. They were stopped at Chowbazar, where GJM cadres put up a desk. Teachers and some students brought in the identity cards, which were checked and the names noted in a register. Thereafter transit passes were issued and the buses were allow3d to leave.
“Our boarders have left the school and they have been handed over to their parents in Siliguri. Our school is scheduled to reopen on July 3. We are in touch with the parents. We will do the needful according to the prevailing situation,” said Father Shajumon, Rector of St Joseph’s North Point. Nearly 500 students, boarders. Students hugging each other before getting bus : Mount Hermon School boarders leave Darjeeling on vacation amidst the ongoing indefinite bandh call by Gorkha Janamukti Morcha provided a 12 hour window period for evacuation of boarders of hill school on Friday , June 23 2017. Express photo by Partha Paul .
“Fifty students left for Siliguri today. They were dropped near Mainak Hotel in Siliguri where they are handed over to their parents,” said Partha Pratim Dey, a senior master at Mt Hermon school.
Students from boarding schools in Kurseong and Kalimpong too left school and reached Siliguri. There are over 50 boarding schools in the Hills with over 6000 students. Meanwhile, in Siliguri, happy scenes of parents receiving their students were seen. Parents hugged their children ending days of anxiety after trouble began in the Hills on June 8 (when police-GJM clashed while Mamata Banrjee held her first cabinet meeting in the Hills).
“My two son, one at seven and another at class ten are students of North Point. It is a great relief that they have arrived safely to us in Siliguri. We shortly take them home,” Anjay Shah, a resident of Kathmandu.
TheIndianExpress
Darjeeling