When ‘Darjeeling Spirit’ Saved the Day

- June 10, 2017
The battle between the Mamata Banerjee dispensation and the Gorkha Janmukti Morcha (GJM) in the picturesque Darjeeling hills may not have an end in sight yet, but humanity, under the hashtag ‘Darjeeling Spirit’ did put up a strong fight, and won amid all the ugliness.
Once a summer resort for the British Raj elite, the popular happy-go-lucky town is home to the Darjeeling Himalayan Railways or toy trains, velvety tea gardens and the unparalleled Darjeeling tea. Tourism is its mainstay.
At the height of its tourist season, the town witnessed the GJM unrest demanding the separate state of Gorkhaland. As the Army and police contingents closed in to bring things under control, the Queen of Hills opened her heart out to the over 40,000 tourists stranded when GJM activists clashed with police.
As GJM and the Trinamool Congress traded barbs, locals brewed the famous Darjeeling cuppa and stirred up pots of khichdi for the tourists, rendered hotel-less and helpless due to the 12-hour GJM shutdown in the historic town.
They rolled out rugs, carpets and bed sheets to offer the confused travellers a resting place. Women turned up with hands of bananas for the Army personnel, even as rumours spread thick and fast – mainly over social media – that locals resent the military intrusion.
These were countered by posts that asserted “Every household in Darjeeling has a daughter, a son, a father, a brother or a friend serving in the army… so we know how to respect them”.
Home to iconic bakeries and cafes serving English breakfast such as Keventer’s and Glenary’s, the sleepy town of Darjeeling springs to life in the summer season as tourists from across the globe troop in to watch the sunset at Tiger Hill or gaze at the mighty Kanchenjunga peak.
Glenary’s remained shut during the day but opened up late on Friday evening dishing out its usual array of cakes and pastries.
Perched at an altitude of 6,710 ft, to reach Darjeeling one has to drive up the circuitous colonial era Hill Curt Road – spending three hours chasing clouds, with the greetings of ever-smiling locals making the uphill climb through orchid-lined hillsides a journey to remember for life.
Who are these “locals”?
As per the 2011 census, Darjeeling is home to 132,016 people of whom ethnic Gorkhas form the majority, followed by indigenous ethnic groups, including the Lepchas and Bhutias. Bengalis, Marwaris, Anglo-Indians, Han Chinese, Biharis and Tibetans also call the town their own.
Nepali is the dominant language, but Tibetan, Hindi, English and Bengali are also spoken. The rich linguistic diversity was evident in the last two days when Darjeeling was on the boil. It was as if it was easily forgotten that the trigger for the fracas was language itself, with the Mamata Banerjee government’s earlier decision to make Bengali compulsory upto Class 10 providing the GJM the ammo to renew the Gorkhaland movement.
Camera grabs did the rounds on social media showing the Lepchas and Bhutias conversing with travellers in English and Hindi, easing off their worries over plates of baked goods, steamed momos and the humble khichdi. As the West Bengal government pressed a fleet of buses into service to ferry the marooned tourists, a couple of local schools also offered their buses to aid them.
Netizens hailed the ‘Darjeeling Spirit’ and urged more to come forward. GJM Chief Bimal Gurung tweeted late on Friday night: “I would like to thank the people of Darjeeling and elected members of Darjeeling Municipality who voluntarily served the tourists with food and water while they waited for the bus to go back to Siliguri.”
-IANS 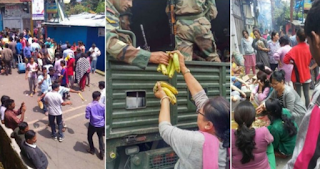