- June 09, 2017
Nearly 4000 people today thronged at Bagdogra airport in this commercial town of north Bengal's Siliguri after coming from Darjeeling Hills in the wake bloody violence and subsequent 12-hour shut sponsored by the Gorkha Janmukti Morcha.
The airport, after a special request from the state government has been kept open sinceearly this morning to facilitate the air passengers.
"But we never thought such rush at a time for flights to Kolkata, Delhi and other places of the country," an airport official said.
Bagdogra airport director Rakesh Ranjan Sahay said exactly 3906 passengers have been reported for catching flights for different routes. 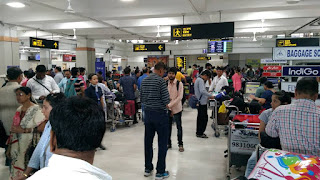