- June 04, 2017
Siliguri: The Sashastra Seema Bal (SSB) on Sunday apprehended two persons for illegal smuggling of Rhino horn, Tokay gecko and Reindeer horn from India to China.
The SSB has recovered 145 gms of Rhino horn, four Tokay gecko and a Reindeer horn from their possession. The total value of seized items is worth Rs. 3.5 crore.
The apprehended persons named Dhiren Barman and Dhalu Barman were handed over to West Bengal, Jaldapara south, forest office Alipurduar.
During interrogation, it was revealed that both the persons usually get Rs. five to Rs. 20 lakh per Tokkey as per its weight and size.
Smuggling of forest produce and wildlife is a major crime in the area of responsibilities of the SSB.
These Tokkey Gecko and Rhino Horn were to be smuggled from India to China through Bhutan and are used for medicinal purposes.
Tokkey and Rhino are found in Jaldapara forest and Buxa Tiger reserve. 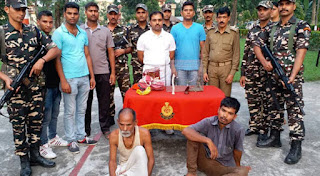