- June 08, 2017
Police had to resort to lathi-charge to disperse Gorkha Janmukti Morcha protesters in Darjeeling on Thursday when protesters allegedly set fire to three police vehicles, according to media reports.
West Bengal Chief Minister Mamata Banerjee is in Darjeeling to chair a state cabinet meeting.
A cabinet meeting is being held in Darjeeling after a gap for 45 years, media reported.
The Gorkha Janmukti Morcha (GJM) is protesting against a number of issues, one of which is to do with the introduction of Bengali as a subject in schools, media reports said.
The GJM protesters had gathered in front of the Raj Bhavan, the West Bengal governor's summer residence and the venue of the cabinet meeting. 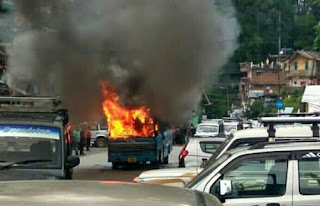 Unrest also seen at Darjeeling More in Siliguri and Kaljmpong after Darjeeling agitation.