Over 550 fake doctors under scanner in Bengal

- June 04, 2017
The arrest of two fake MBBS doctors, one from Alipurduar and the other from North Dinajpur late last month seem to have opened a can of worms with the Bengal Crime Investigation Department in a preliminary survey report submitted to Surajit Karpurakayastha, the Director General of Police, claiming proliferation of at least 550 such doctors in various parts of the State.
One of the two doctors Kaisar Alam was attached to a Government Primary Health care Centre in North Dinajpur and was drawing a hefty salary, performing medical procedures and prescribing medicines with impunity. The other doctor Khushinath Haldar was practicing at Alipurduar.
Close on the heels of its submission of the report the CID on Saturday arrested Dr Subhendu Bhattacharya who had been practicing for quite a few years. He was remanded to five-days police custody by a Howrah court.
Bhattacharya’s arrest came within a week of the arrest of Dr Naren Pandey another “busy dermatologist” associated with a top city private hospital prompting the Government to issue a new circular ordering “doctors’ audit” in every Government facility.
“The Government doctors will be given prescribed forms with columns providing information of their medical career alongwith certified copies of the certificates,” sources said.
The investigators who have not been able to extract even a Class X certificate from the accused doctors were trying to ascertain the academic credentials of the “fake doctors” including Pandey who was not only running his chamber and a diagnostic clinic but had also  attended a number of medical seminars abroad and in the country.
Pandey was one of the listed speakers in a medical seminar scheduled to be held in Kolkata under the auspices of the Indian Medical Association. The seminar was however called off subsequent to his arrest, insiders said. Pandey had reportedly told the investigators that he had procured his job on the basis of a certificate from the Yunani Council, insiders said.
The CID was zeroing in on another 12 doctors, including one currently working at a GH in South 24 Parganas, insiders said adding the intelligence agency had written to the Medical Council of India seeking their registration numbers and other credentials.
“Our investigations have revealed that fake doctors not less than 550 are working throughout the State. Some of them are also attached to Government Hospitals and renowned private facilities” sources said adding the racket could involve senior officials “both working and retired,” in the Health Department.
The West Bengal Medical Council had also been approached for assistance, investigators said adding there were information that the “fake doctors” had procured certificates from South India, Jharkhand, Bihar, Chhattisgarh and Odisha.
By Saugar Sengupta, Sunday Pioneer 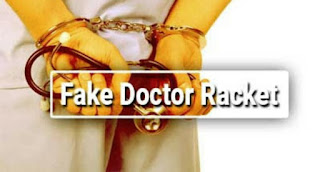