- June 05, 2017
Amid protests over language issue, West Bengal chief minister Mamata Banerjee on Monday kicked off her 5-day north Bengal trip with a programme in Mirik.
Mamata is slated to attend a programme at Mirik today followed by an administrative meeting on June 7 and a Cabinet meeting on June 8 at Raj Bhawan in Darjeeling.
Earlier in the day, Binoy Tamang-led group launched a massive agitation to protest Mamata's visit to Darjeeling district's newly created sub-division Mirik.
Her effigy was also burnt in the hill town.
On May 30, Gorkha Janmukti Morcha (GJM) had announced massive agitation against the three language policy including Bengali as one of the subjects mulled by the Bengal government.
The GJM dubbed the government's policy as a forceful imposition of the Bengali language.
Report and Photo: Sanjay Chakraborty, TOI 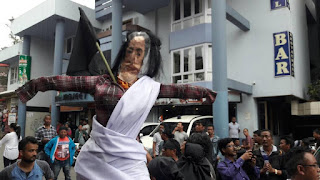