- June 05, 2017
West Bengal Chief Minister Mamata Banerjee started her North Bengal trip on Monday amid protests
Mamata Banerjee's decision to make Bengali a compulsory language from Class 1 to Class 10 in all schools across West Bengal has met with stiff opposition in the hills, where many do not speak Bengali.
"From now on, it will be mandatory for students to learn Bengali in schools. The schools affiliated to other boards (ICSE/CBSE) will have to make Bengali as an optional subject from Class 1, giving students the option to choose it either as second or third language", state education minister Partha Chatterjee said on May 16.
GJM's ATTACK AGAINST MAMATA GOVT
GJM party Chief Bimal Gurung said, "The imposition of Bengali language is the reason behind this protest because the condition and situation in our area shall change for the bad."
GJM argued that it should be a student's right to choose his or her third language--in the case of Darjeeling, it could be either Hindi or Bengali as Nepali is taught as the first language in the schools here.
GJM leaders have announced a black flag rally across Darjeeling hills on June 8.
"Language, artists should not be dragged into political issues, which is being done by the present state government. I want to appeal to the public that everyone participates in this rally. If needed, we shall reach out to Delhi because this is an attack on our language and the consequences shall have to be borne by the government," the GJM chief said.
TRINAMOOL GOVT's COUNTER-CHARGE
Rabindra Nath Ghosh, who is in-charge of the North Bengal development department, said, "GJM's Bimal Gurung has understood that if Mamata Banerjee comes to Darjeeling she will talk about development because in the past 20 years infrastructural developments in the region have been little".
The minister in the TMC government said that "people will go to Mamata Banerjee for their betterment".
"Mamata Banerjee has been setting up medical colleges and universities. Bimal Gurung tends to declare strikes now and then," he said.
The GJM leaders have announced a black flag rally across Darjeeling hills on June 8.
Manogya Loiwal Kolkata/ Darjeeling
(With inputs from Kayes Ansari in Darjeeling)
India Today 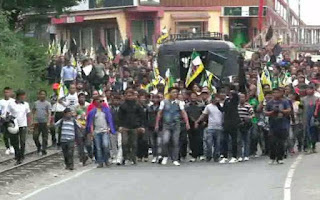