- June 16, 2017
Kolkata: A bus overturned after hitting a road divider while overtaking another bus on the busy Howrah Bridge today killing two persons and injuring seven.
The accident took place around 10.58 am when the Sealdah-bound minibus dashed against the road divider and lost control while overtaking another bus when it was descending from the bridge, a senior officer of Kolkata Traffic Police said.
Two children were among the injured and were rushed to a hospital. The police were yet to establish the identities of the victims. The accident led to a huge traffic jam on the bridge. The driver fled the scene after the incident.
“We are checking whether there was any technical problem with the bus or whether there was any fault on the part of the driver of the other bus,” the officer said. 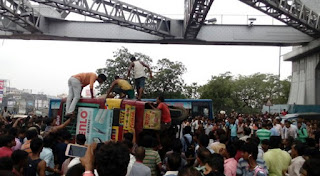