- June 08, 2017
Emotions ran high today right from the day started. As early as 7 AM we had received complaints from our readers about heavy police deployment in and around Richmond hills and all roads leading to it.
Readers from Lebong region complained that police had stopped vehicles coming to town, with ordinary people including school children having to bear the burden, due to vehicles being prevented from entering the town many students had to return home, some of them had exams going on.
As word spread about police not allowing vehicles to enter town, more than expected people joined the GJM rally at Bhanu Bhawan. The rally was vocal and chants could be heard across the town, including at Raj Bhawan where CM Mamata Banerjee was holding a Cabinet meeting of the West Bengal government.
What happened next is unclear.
But stones were pelted.
GJM claim that the stones were thrown at their rally right when an effigy symbolizing Mamata Banerjee was about to be burned. Police in the meanwhile claim stones and beer bottles were pelted at them from GJMs side.
Pandemonium broke out after that, with police resorting to lathi charge and firing tear gas shells to disperse the crowd.
According to senior police source, "five police jeeps, a government (NBSTC) bus and a total of 12 cars have been torched by the protesters..." He added, "We had to lathi charge and fire tear gas shells after protesters resorted to stone-pelting."
GJM in the meanwhile claims that the "incident was triggered by Bengal government to quash the protest against the imposition of Bengali language in the hills and to quell the demand for Gorkhaland." GJM has called for 12 hours strike tomorrow 9th of June, 2017 to protest what they are terming "police high handedness."
The administration has called in Army to maintain peace and we join the Army in requesting our people to respect the law and to allow peace to prevail.
We appeal to the administration to allow local channels to broadcast news, either that or prevent all news channels from reporting on this issue all together. it's unfair that while Kolakata based news channels are reporting on this issue, local news outlets have been prevented from doing so.
This is a direct infringement on our freedom of speech and expression, and also against the fundamental tenant of our nation - a free press.
Via TheDC 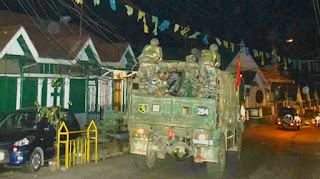