- June 03, 2017
Barely three weeks after a woman gave birth to a child at the Kolaghat station in East Midnapore, there was another childbirth on Saturday, this time inside a Sealdah-bound Bongaon Matribhoomi local. Doctors and nurses from Eastern Railway’s B R Singh Hospital were present at the station when the train reached there around 9.15 am and examined the mother and child before sending them to the Nil Ratan Sircar Medical College and Hospital where the woman was originally headed.
“The motorman and guard of the Bongaon local informed the control room at Sealdah that a woman had given birth inside the train. Doctors at the B R Singh Hospital were informed accordingly. A medical team was waiting at Sealdah to receive the train and provide any emergency medical care required. Fortunately, the woman and her child were well,” said R N Mahapatra, CPRO, ER.
According to an official, Ajina Bibi, a resident of Bongaon in North 24 Parganas, was in an advanced stage of pregnancy when she boarded the local train from Machhalandapur. She was planning to travel to the state-run hospital in Sealdah for admission. Ajina’s labour pains started midway and she sought assistance from co-passengers. Women travelling by the same train immediately cordoned off the section of the coach where the pregnant woman was travelling and helped her in giving birth to a boy child.
Passengers also informed the guard and motorman who passed on the message to the control room. 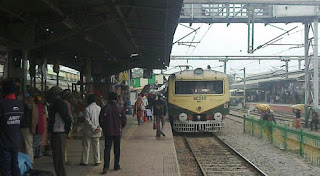