- June 10, 2017
Darjeeling: From Monday, indefinite strike declared in the hills. The Gorkha Janmukti Morcha has called this strike.
Nearly 48 hours after West Bengal's "queen of hills" Darjeeling was turned into a war zone due to a political violence, superintendent of Darjeeling district police, Amit Javalgi, has been sent on a compulsory waiting, officials said.
According to reports, replacing Amit Javalgi, Deputy Commissioner (Central division) of Kolkata Police, Akhilesh Chaturvedi, took charge as Darjeeling SP on Saturday.
Meanwhile, the West Bengal government on Saturday morning removed the Inspector-in-Charges (ICs) of Kurseong and Kalimpong police stations- Dipankar Som and Barun Rai respectively.
Parijat Sarkar and Tirthasarathi Nath have been appointed as the new ICs of Kurseong and Kalimpong police stations, where political clashes erupted on Thursday, reports said.
Earlier on Thursday late afternoon, a skirmish broke out between Gorkha Janmukti Morcha (GJM) and local police in Darjeeling hills when state Chief Minister Mamata Banerjee was holding her cabinet meeting there.
Protesters threw stones, bricks and glass bottles and allegedly hurled crude bombs aiming at policemen and set at least 12 vehicles, including state-run buses and police jeeps, and a police booth on fire.
At least 50 security personnel, including three officials and few women cops, were injured in the clash and over 10,000 tourists were stranded due to the standoff.
Later state government shout Army help to restore situation and as many as six Army coloumns were deployed there to bring the situation under control.
After overseeing tourist-evacuation process in the hills, Mamata Banerjee came down to Siliguri on Friday night and she arrived in Kolkata on Saturday evening.
Meanwhile, an official of state finance department told ILS that the government has formed a twelve-man team, comprising the senior officers of West Bengal Audit and Account Services (WBAAS), to audit the accounts of Gorkhaland Territorial Administration (GTA).
"We have received a strict direction from the government to lodge police complaint immediately if any misappropriation of funds is found in the GTA," the official said.
However, a local police official claimed that the situation in the hills is completely under control as no more violence has been reported since Friday evening.
Meanwhile, GJM chief Bimal Gurung on Saturday told ILS that their movement, demanding a separate state of Gorkhaland, will be continued in future and the party has decided to go on indefinite strike from Monday (Jun 12).
"We held a meeting today to set the next steps of our movement and after hour-long discussion, we have decided to call for an indefinite strike, starting from June 12 (Monday)," Bimal Gurung said.
"All educational institutions, shops, hotels, tour and tourism, transports and emergency services will be exempted from the strike and banks will be allowed to open on every Monday and Thursday," Gurung added. "No government offices, neither state government nor the Central, will open here from Monday."
GJM general secretary, Roshan Giri, said that the party will request all political parties soon to hold an all-party meeting on their demand for Gorkhaland.
"We will send letter to Union Home Minister Rajnath Singh describing how the state government torturing Gorkhas," Giri told ILS.
GJM leaders, however, assured that tourists won't face any trouble in Darjeeling hills due to the indefinite strike. 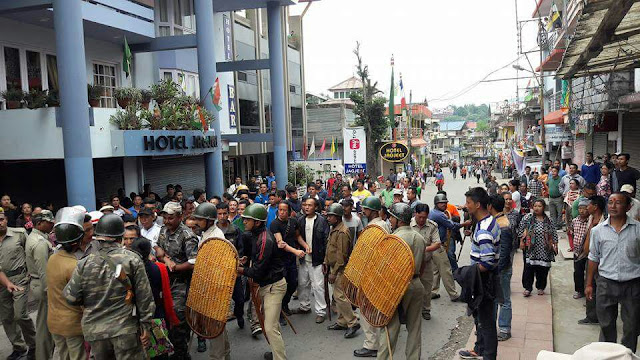