- June 09, 2017
Gorkha Janmukti Morcha chief Bimal Gurung on Friday projected himself as the ‘chief minister of the hills’ and challenged West Bengal’s Chief Minister Mamata Banerjee to stop the agitation in the area.
Gurung, who is also head of the Gorkhaland Territorial Administration, said it was his writ that ran in the hills.
”As the chief minister of West Bengal she is trying to show her strength. But she must not forget that I am an elected member of the GTA. I am the chief minister of the hills, I challenge her to stop the agitation in the hills,” Gurung said.
Gurung said he would talk to the Centre about the deployment of army and the alleged police atrocities. The GJM had decided to protest Mamata’s decision to make Bengali a mandatory subject in schools, even though she was quick to exclude the hills later.
Mamata, who had held a cabinet meeting here of her government on Thursday, had to call out the army after GJM supporters clashed with the police, setting some police vehicles on fire, when they were kept away from the Governor’s House here, the venue of the meeting.
The army had staged flag marches in Darjeeling on Thursday, and was also deployed in Kurseong and Kalimpong on Friday as a precautionary measure. Three columns of the Central Reserve Police Force have also been deployed in these places.
CRPF and Army troops stage a flag march.
Mamata, who decided on Thursday night to stay back in Darjeeling till peace is restored, said the 12-hour strike called by GJM was “illegal”.
Although she promised legal action against those who took part in the strike, normal life was stalled as most shops, eateries and markets remained closed and vehicles did not ply.
“Strike, bandh cannot be called for every other issue. This cannot be a message of peace,” said Mamata.
The chief minister went on a morning walk on Friday.
“I have been roaming around the area since morning. I have seen the manner in which the vehicles have been set on fire. There was no issue or any incident. We want peace and development in the hills. The army has already started route march. Law will take its own course,” she said.
The government has already filed police cases under non-bailable sections against Gurung and GJM general secretary Roshan Giri.
Mamata said the GTA under Gurung has failed to carry out any development work and now, when their term is scheduled to end next month, they have started “torturing the public”.
“Government was soft and had given them all kind of support but now government will be very tough after what has happened yesterday,” she said.
She urged the people of the hills not to support the GJM’s movement as it was scaring away tourists from the hills.
“They (GJM) are driving away 'Lakshmi' (Goddess of wealth) from the Hills. I cannot understand what kind of movement they are up to. We are with the brothers and sisters of the hills and will give them full help and ask them not to give support to Bimal Gurung,” Mamata said.
Telegraph 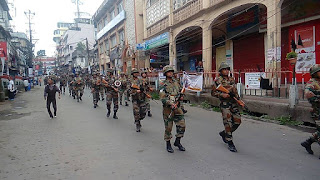