- June 12, 2017
Darjeeling's iconic heritage train was halted in its track after life came to a standstill on the first day of indefinite bandh by Gorkha Janmukti Morcha (GJM) in Darjeeling, Kurseong and Kalimpong. A number of government offices in Bijanbari Block and Singmari were rampaged and set on fire. The police have detained around ten people in Darjeeling.
The GJM activists were detained today for trying to set on fire a BDO office at Phulbazar in Bijanbari block.
Initially, there was thin attendance in the government offices with Chief Minister Mamata Banerjee vowing to keep the life normal in the hills.
Around 12.30pm, GJM supporters set fire to the Public Works Department (PWD) office in Singmari, destroying documents and damaging furniture. Earlier, BDO office in Bijanbari was also gutted in fire.
Several tea garden unions led by CITU have called a two-day tea-garden strike from Alipurduar to Birpara. Making a shift in their strategy, GJM chief Bimal Gurung has hailed the bandh.
However, Gurung had exempted transport, schools and colleges from the indefinite strike, while he asked people to not join office.
The city's eateries, hotels, shops and private offices were also non-operational, while the government offices have been kept open, except the Gorkha Territorial Administration (GTA) offices.
"Several thousands of Morcha activists have come out on the roads in support of the strike. Our people have not set fire in any offices. We want the Central government to accept our demand for the separate Gorkhaland," Rosahn Giri, a GJM leader said.
"This is a political game. Mamata is working for the development of the hills. But bandh is actually illegal," State Minister Sovan Deb Chatterjee said.
The administration has deployed CRPF, RAF and combat forces in the hills. The CRPF has been deployed inside District Magistrate's office also.
Meanwhile, 'chakka jam' has been called in four districts in North Bengal--Darjeeling, Jalpaiguri, Coochbehar and Alipurduar, starting from Tuesday. Morcha has supported this strike called by various unions. The labourer's have demanded to increase daily minimum wage in tea gardens from Rs 132. Left Front Darjeeling unit has supported the GJM called strike in Darjeeling.
Mumbai Mirror 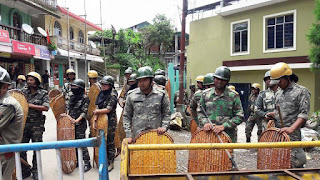